The Triple Threat of Tobacco Use on Employer, Clinical, and Medication Complexity

As part of our continuing Social Determinants of Health article series, we are examining the negative impacts of substance use or abuse on injury and recovery. In this article, we look specifically at tobacco use as a complicating factor in the workplace and as a detractor from injured worker outcomes.

They say that old habits are hard to kick, and tobacco consumption is perhaps the oldest use of addictive substances on record in North America. Recent archaeological evidence uncovered in Utah indicates tobacco use as early as 12,000 to 12,500 years ago, although how exactly it was used at that time is unknown.1 Regarding tobacco pipe smoking specifically, current science dates the practice as far back as 1685-1530 BC, based on evidence of nicotine identified in a smoking tube found at the Flint River archaeological site in northern Alabama.2

More than 3,000 years later, the impacts of smoking tobacco products continue to have significant consequences for the health of the global population at large. Despite significant and continued declines in cigarette smoking prevalence since its widespread popularity in the 1960s, the practice still causes nearly half a million deaths each year and remains the #1 preventable cause of death in this country. 3-5  These mortality rates are just one piece of the story, as for every death, there is exponential morbidity, healthcare utilization, and costs associated with tobacco smoking.

Recognized as a patient risk factor within workers’ compensation healthcare, tobacco use, including cigarette smoking, has specific impacts on employee and injured worker patient populations.

Smoking has detrimental impacts to worker productivity, including both absenteeism and presenteeism factors6

Rates of tobacco use are higher among blue collar occupations, with the highest prevalence of cigarette smoking in construction, mining and manufacturing7

Tobacco use increases fracture risk, slows healing, and is linked to increased risk for post-surgical complications that increase morbidity, mortality, and healthcare interventions9-13

Even before the complicating factor of a workplace injury, employers face added complexity and costs in their employee populations due to tobacco smoking. In 2013, the added costs associated with employing a smoker vs nonsmoker were estimated at $5186.8 Adjusting for annual average inflation, that puts today’s estimate at more than $7000.

These excess costs are driven by factors that include added healthcare services and costs, as well as costs due to lost work time and reduced productivity, which can come in the form of absenteeism as well as presenteeism17 – the concept of an employee being present at work, but not fully functioning or having their performance hindered by illness or a medical condition. Rather than ill-intentioned, this is often the employee’s best effort to still show up and perform their job duties in the face of anything from allergies to depression. However even with the best of intentions, it has been posited that the hidden costs of presenteeism can result in greater financial loss to the employer than direct healthcare costs.18

Smoke breaks are another contributor to lost time and productivity.8 In a public health report published in 2020, former U.S. Surgeon General Dr. Jerome Adams underscored findings from the 2013 study, stating that smoking breaks are “the largest single cost from a smoking employee and result in 8 to 30 minutes per day per employee in lost work time.”6

The costs cited in the 2013 study do not take into account additional, risk-associated factors, such as the potential for organizations that adopt a smoke-free workplace to negotiate lower fire and property insurance costs vs workplaces that are not smoke-free.17 Organizations that allow worksite smoking can also open themselves up to legal liability and financial compensability for nonsmoking employees facing health consequences from exposure to secondhand smoke in the workplace. Conversely, smoke-free workplaces – and the employees who work in them – can benefit in a number of ways. 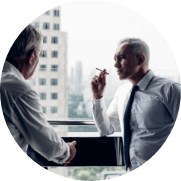 Tobacco use deteriorates the health and function of all major body systems20 and is linked to multiple clinical detriments relevant to injury and recovery. Cigarette smoking is known to delay wound healing due to the damage it inflicts on blood vessels, blood flowing to wounds, and decreased oxygen levels in blood. This includes chronic wounds such as pressure ulcers,9 which are extremely common and have been estimated by Medicare to add $43,180 in costs per ulcer to a hospital stay.10

Notable is the established connection between tobacco use and post-surgical complications. The trauma of surgical intervention triggers a natural inflammatory response in the body that enables tissue recovery and helps to fight infection. The negative impacts of tobacco on cardiovascular function, pulmonary function and tissue healing are shown to interfere with this process, lending itself to higher rates of significant postsurgical complications including, but not limited to:12,13

The Compounded Complexity of Smoking and Workers’ Compensation21

A 2012 study examined the scores on the Oswestry Disability Index (ODI) and a visual analog pain scale (VAS) in a population of nearly 14,000 patients being treated for spinal disorders

Scores were analyzed for their relationship with 3 independent factors: history of smoking, workers' compensation, or litigation issues

A significant difference resulted between smoking status groups for ODI scores, with the worst ODI scores reported by current smokers (44.33) vs nonsmokers (36.02)

Tobacco smoke can negatively interact with certain medications by impacting how the body absorbs, metabolizes, distributes and excretes them. This can mean reducing or, in rare cases, enhancing the effectiveness of the medication. It can also mean increasing the risk of adverse effects. Some of the potentially impacted  prescribed within workers’ compensation include, but are not limited to:14,15

Here’s the good news. Tobacco use is a modifiable health factor, albeit a complex one that involves physical, emotional, psychological and even social implications. As such, modifying this behavior is hard-earned, with fewer than 1 in 10 adult smokers successfully quitting smoking.22 But with the right programs and support in place, this barrier to good health and good outcomes can be overcome. Here are some things to consider regarding tobacco use in employee or injured worker populations:

Smoking cessation programs that take a supportive approach have demonstrated positive impacts for both employees and employers:

Employer-sponsored smoking cessation benefits – such as health insurance coverage for counseling and cessation treatments, worksite cessation treatments, or direct employee incentives for quitting – are more likely to have their employees quit smoking, and in turn these businesses enjoy improved employee health, improved productivity, and lower associated costs.6 But experts emphasize that the most successful approaches are comprehensive and holistic, treating smokers in much the same way as an employee with a chronic health condition.23

Surgery presents an opportunity for intervention:

Studies have found that the act of undergoing surgery alone presents increased motivation for smoking cessation.24,25 When coupled with an intervention, the likelihood of longer-term behavioral change further increases.25 While intervention can take shape in multiple forms, digital behavior change interventions (DBCIs), or programs that incorporate text, smartphone apps or games, are showing some success in changing lifestyle behaviors such as tobacco use in the perioperative setting, although more studies are needed.26 Whether leveraging a DBCI or more traditional approach to smoking cessation – there is an opportunity to intervene in the perioperative setting and potentially reduce the complexity of a claim’s trajectory.

Differences in risk exist among occupations:

Tobacco use prevalence varies by industry and occupation, with the highest rates among blue collar occupations. Prevalence of cigarette smoking is highest in construction, mining and manufacturing,7 and smokeless tobacco is used by more than 10% of workers in construction and extraction jobs nearly 20% of workers in the mining industry, which exceeds the average 3% prevalence across the overall workforce.27

Differences in risk exist among people with behavioral health conditions:

There are disparities in how individuals with behavioral or mental health conditions are targeted by commercial tobacco, perceived by healthcare providers, and experience the negative health impacts of smoking. US adults with mental illness self-reported cigarette smoking at a rate 1.8 times higher than those without, a 28.2%  and 15.8%, respectively.28

Where there is medication complexity, there is often other complexity to be uncovered:

It is not unusual that a claim with significant therapeutic complexity is influenced by other, non-medication factors, among which may be some form of substance use or abuse, including tobacco use. Which is why these cases often benefit from a deeper review of the patient’s complete medical records, rather than a review of medications alone. In an analysis of complex claims undergoing Healthesystems’ intensive clinical review services, a majority of these claims contained data within their medical records indicating substance abuse, inclusive of tobacco use.