The Patient Experience in Perspective: Applying Empathy to the Work Comp Claims Process

Workers’ comp patients must navigate a complex system, which not only includes interactions with clinicians, but also claims professionals, case managers, and a variety of other individuals. An empathetic approach can improve the patient experience, as well as outcomes.

Patient empathy has been a popular topic within the healthcare industry over the past two decades.  As healthcare organizations began focusing on the patient ‘experience of care’ as a measure of success, demonstrating empathy became an important goal for individual healthcare professionals, as well as overall patient engagement programs.

In workers’ comp, there is increasing support for a more empathetic and patient-centric claims model, and with good reason. A poor claims experience is not simply a matter of dissatisfaction on the part of the injured worker. A strong correlation has been reported between the claims process experience and return to work status. According to one study, injured workers who had a negative or neutral claim experience were less likely to have returned to work than those who had a positive experience – 65% as compared to 84% – when controlling for all other factors.1  In addition, negative interactions during the claims process can cause or exacerbate psychosocial factors, which can impact worker health in both the short and long term.2

Although the degree of injury or illness can vary, the majority of employees who file workers’ compensation claims require medical attention and, therefore, become patients. And their experience as patients may be inferior to those covered by other types of insurance. According to a recent study, workers’ comp patients are less satisfied with their medical providers than other payer patients (including private insurance, Medicare and Medicaid) with 59% of workers’ comp patients saying they would recommend their providers, as compared to 79% of non-workers’ comp patients.3   And a recent Healthesystems’ study found that 60% of patients who had initial medical exams reported a negative provider experience.4 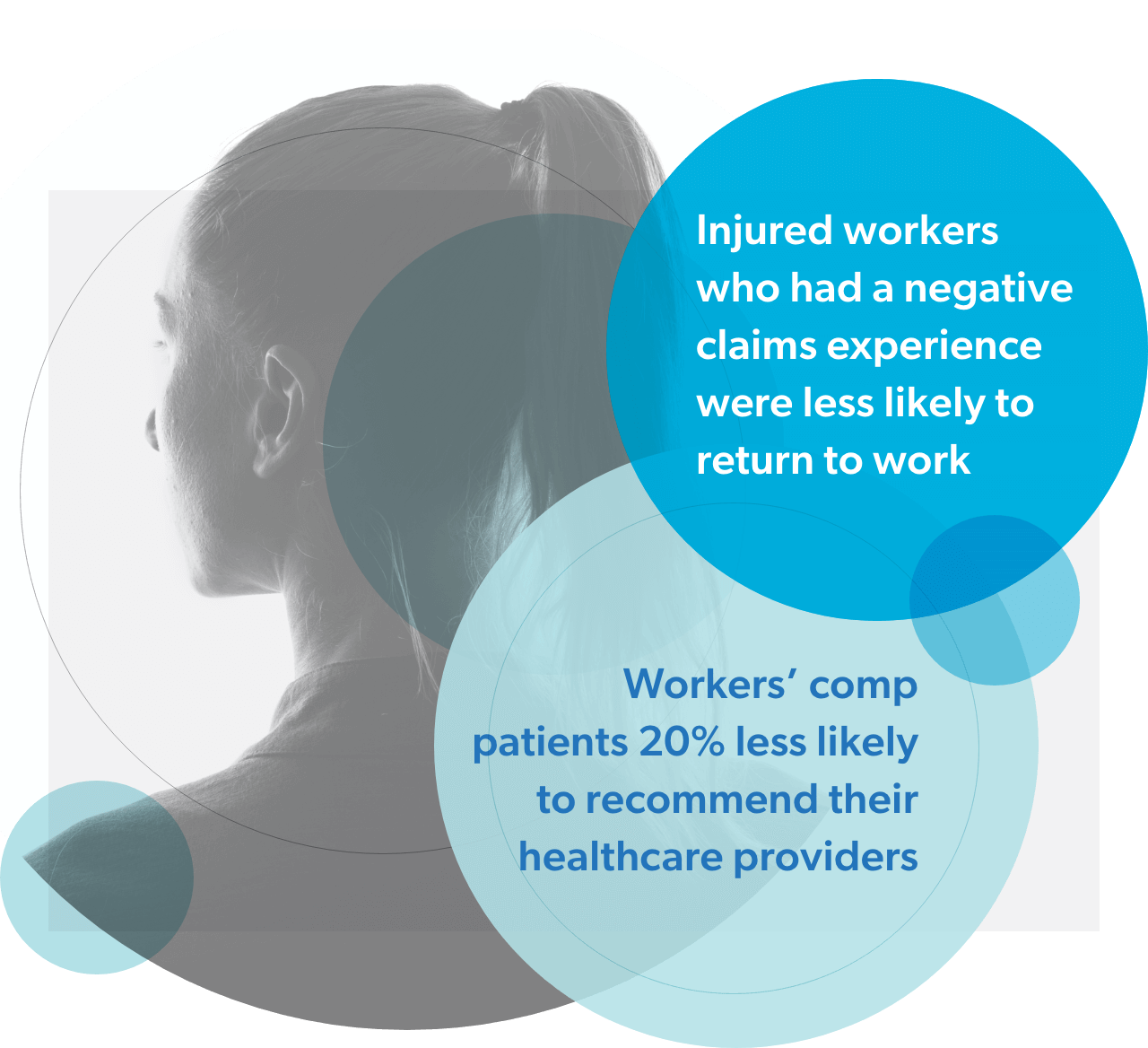 But medical providers are not the only driver of unsatisfactory patient experience. A review of multiple qualitative studies regarding injured workers’ interactions with employers, insurers, and healthcare providers found that a majority of injured workers experience negative interactions at every stage of the claims process.2  And approximately 70% of patients who were referred to specialists were satisfied with the care they received, but only 59% were satisfied with how that care was coordinated. 5

Traditionally defined as the ability to deeply understand another’s emotions and/or vicariously feel what another person is feeling, empathy is often seen as a personal characteristic that one either does or does not possess. But the Society for General Internal Medicine describes empathy in healthcare as: “the act of correctly acknowledging the emotional state of another without experiencing that state oneself.” 6  And that is a more helpful way to think of empathy as a mechanism for improving the patient experience.

Workers’ comp patients must navigate a complex system, which not only includes interactions with clinicians, but also claims professionals, case managers, and a variety of other individuals from multiple organizations. Not to mention a myriad of bureaucratic and legal requirements.  So, for workers’ comp purposes, we might expand the definition of empathy to: 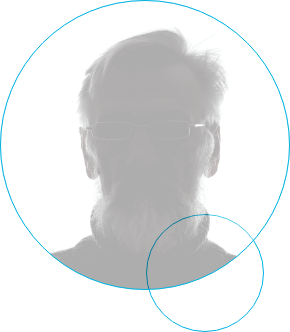 Every aspect of the claims process should support a full recovery and a timely return to work for injured employees. To be effective in workers’ comp, empathy must be converted into action and applied consistently across the entire claims experience, which includes:

Reporting the injury to employer

Physical and/or other therapy treatments

Return to work preparation and authorization

Of course, not every injured worker is exposed to all of these actions and many experience only the first few. But there are steps within each step involving information gathering, investigations, prior authorizations, approvals, rejections, etc. that can pose challenges for patients. A recent study on the views of stakeholders regarding workers’ compensation policies and processes reported that injured workers experienced three primary challenges in the areas of claims processing and care delivery: excessive system navigation challenges; lack of integration with the rest of healthcare; and poor quality care/access and denial of care.7

Empathy can be incorporated into every part of the process by reviewing each component from the perspective of the patients and making decisions based on their needs. For example, here are three empathetic solutions offered by workers’ comp service providers to address the above challenges:

Roll over the boxes to see the Empathetic Solution

A third-party administrator (TPA) produces and sends personalized video messages to each injured worker explaining the workers’ compensation process from beginning to end. Not only does this help prepare patients for the journey ahead, it allows them to find answers to their questions as they come up, sparing them the inconvenience and delay of finding the right person to assist.

A municipality and its managed care company established a program that gives injured first responders pre-approved and immediate access to any diagnostic tests deemed necessary by the patient’s physician. This allows quick and correct diagnosis of the injury and expedites appropriate treatment, which builds confidence in the worker and facilitates a more rapid recovery.

Healthesystems identifies patients whose medication regimens indicate potential risk and offers one-to-one confidential consultations with a pharmacist. The pharmacist asks the patient about their injury and treatment, as well as their current health status, and reviews the patient’s medication (including any that are prescribed outside of the workers’ comp claim), answering any questions and providing helpful tips when appropriate. The patients feel cared for and receive valuable guidance, and the pharmacist gains insights that help ensure safe and effective medication management.

Lack of integration with the
rest of healthcare system

These are quite different programs, and only one of them involves direct interaction with patients, but they all have one thing in common: focus on the needs of the injured worker. Patient empathy is sometimes best demonstrated through programmatic improvements that make it easier for injured workers to take the right steps on their road to recovery.

As noted earlier, interpersonal empathy is subjective and emotional, and can be highly effective in one-to-one encounters. More comprehensive improvements to the patient experience requires a more systematic approach, which involves the entire organization including its:

Culture: Every organization involved in workers’ compensation is a collection of individuals who make decisions, large and small, that affect injured workers. A culture that values and encourages empathy will drive the desired attitudes and actions among employees. Education and training on an empathetic approach to all job functions should be complemented by a clearly articulated purpose that puts employees and patients first, as well as setting a good example from the top of the organization.

Policies:  All official policies and procedures should be established, reviewed, and revised with the needs of employees and patients first and foremost, and there should be no question on their part about the correct course of action when faced with unexpected or ambiguous circumstances.

Processes: Even the most technical processes are designed by people and an empathetic employee/patient experience should be the driving force behind that design. It is important to keep in mind that even processes that do not involve patients directly still affect them. If there are other stakeholders between your organization and the patient, your processes should be as seamless as possible for those stakeholders, which will in turn benefit the patient.

Partners: The workers’ compensation system is a network of organizations including healthcare providers, benefits managers, ancillary service providers, and more. It only takes one weak link in the chain to disrupt a smooth experience for the patient. It is important to vet and select partners with whom you are philosophically aligned and foster a spirit of collaboration.

We are in the early stages of incorporating deliberate, programmatic empathy in workers’ compensation, and most of the research to this point has focused on the impact of negative patient experiences. For example, injured workers who reported a negative  treatment experience were 3.5 times as likely to receive time-loss compensation compared to patients who had a positive experience.5  Such statistics may provide their own incentives to consider an empathetic approach, but there is also some good evidence from the healthcare industry that empathy makes a difference. 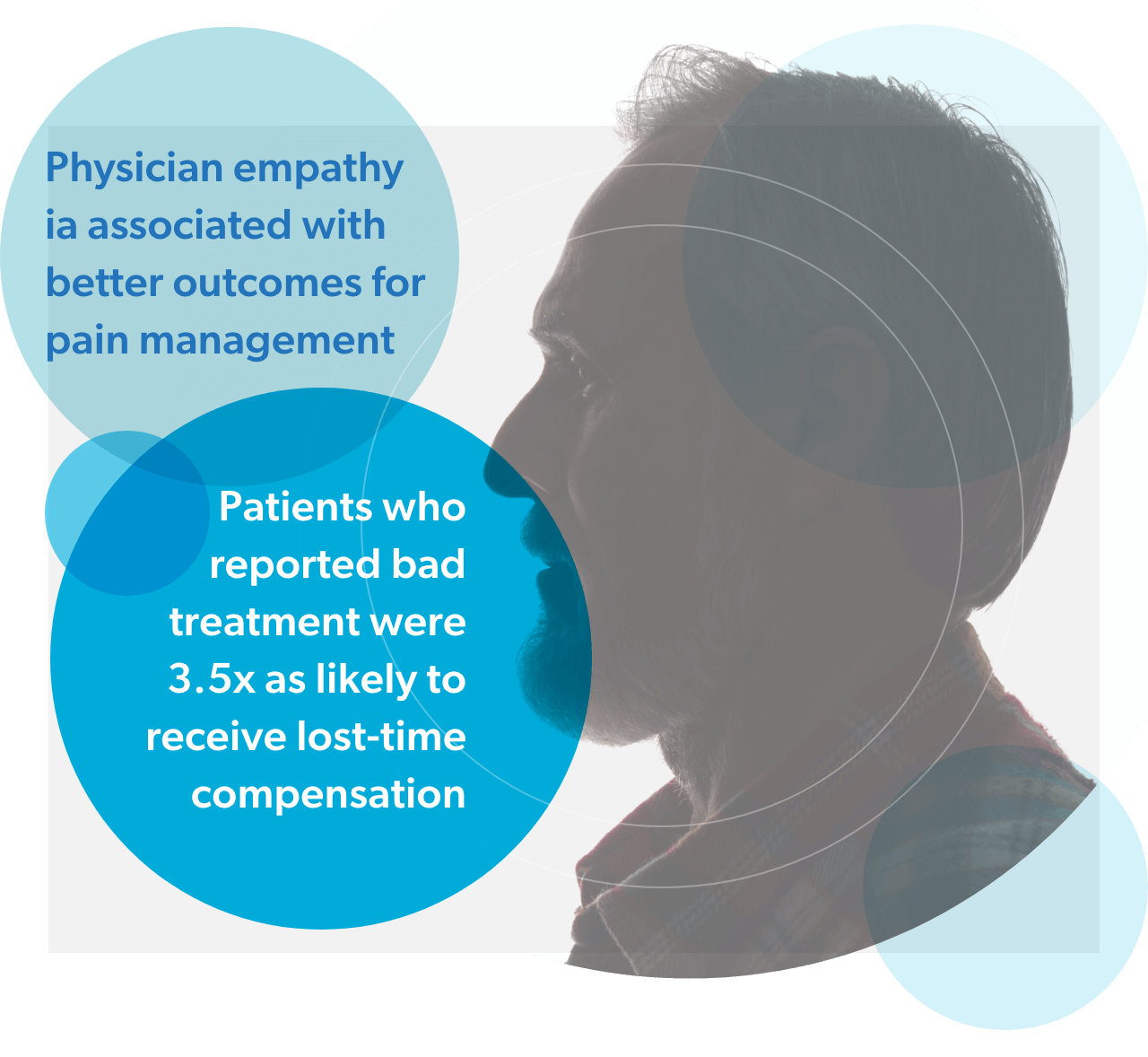 The results of greater empathy in general healthcare are encouraging and should, of course, also benefit workers’ compensation patients. Employing an empathetic model to all aspects of the claims process could not only improve the injured workers’ experience, but health and organizational outcomes as well.